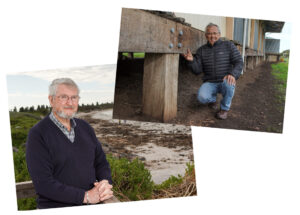 With a combined 20 years experience as directors on the Board, South West Community Foundation is saying farewell and thanks to Barrie Baker and Brian Trotter.

Both have served their communities with great distinction, and been instrumental in helping to build the Foundation towards realising the milestone of $1million in grants across south-west Victoria.

Barrie Baker joined the Foundation in 2007, helping founder Josie Black realise her dream of a community-based philanthropic organisation. Mr Baker was the founding Board Chair and held this position for a number of years, where he was instrumental in establishing the Director’s Giving Circle for current and ex-directors. Mr Baker will be recognised as one of the Foundation’s Named Benefactors at the 2021 Annual General Meeting.

Mr Baker said SWCF has always worked towards getting the community to ‘give where you live’ and helping to provide ‘local money for local needs’.

“There are a number of charitable funds which support an element of the process, but as far as I know the Foundation is the only general one to support the broader community in a broader sense.

“It’s terrific to have clocked up the $1m figure over the 12 years we have been granting, it demonstrates we have given a lot of grants to reach that number to a lot of different organisations.”

Mr Baker said the $1m milestone was particularly impressive as the Foundation was established to provide small grants to community organisations.

“Small grants were a function of wanting to spread the money around. This continues because we have found the big activities and big grants can be supported in other ways, but the small grants – the grant to the local hall rebuilding fund for example – can’t be picked up by other grants,” he said.

“Some of the grants are quite small. We gave money to a CFA brigade for a community notice board, and that cost about $500. But $500 to that group was a lot of money, so it was important to them.

“This was one of Josie Black’s original ideas, that getting support for small towns and communities was important, and I am pleased we have been able to maintain that.”

Brian Trotter joined SWCF in 2011 to help establish the Koroit Sub Fund. Mr Trotter said the fund was established after the closure of the Koroit Health Service nursing home. 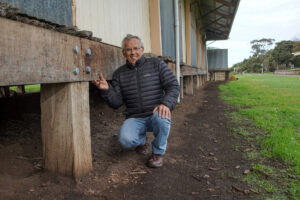 “We finished up at the end of the day with a few dollars and thought we considered setting up a trust fund. After discussions with SWCF the money was transferred across there,” Mr Trotter said.

“We call it the Koroit and District Sub Fund, so when we allocate funds from the fund it’s like throwing a stone in the water. The first ripple is to Koroit and district organisations, but if we don’t allocate all of the money we go to the next ring out, organisations people in the area could access such as Foodshare [Warrnambool], Warrnambool and District Hospice, Port Fairy Surf Lifesaving Club, and Port Fairy Lions Club.”

“I like to be involved in the community, I’ve lived in small communities all my life.”

One project close to Mr Trotter has been the redevelopment of the Koroit Railway Station precinct.

“It’s been great to see the development around the Railway station precinct, and seeing the number of people using the rail trail now compared to 10 years ago when we started,” he said.

“After closing down the nursing home, out of adversity comes opportunity. The opportunity has been to see money go back into the community and community organisations have developed as a result of the funding.

“It becomes a circular thing, one feeds off the other”

South West Community Foundation would like to thank Barrie Baker and Brian Trotter for all their years of service and support, and wish them well for all of the community work they undertake in the future. The Foundation also thanks retiring board members Dr Laurel Myers and Gareth Colliton, and former Executive Officer Karen Norris for all of their hard work.