Port Fairy Tourist Association will be putting the ‘remarkable’ geological, ecological and cultural history of the Tower Hill volcanic structure on the big screen after receiving $12,500 in grants from South West Community Foundation’s 2022 Grant Round.

South West Community Foundation is awarding more than $113,000 in grants to 31 successful community groups across south west Victoria in the 2022 Grant Round, bring the total amount of money distributed since 2007 to more than $1.2million.

Geologist Michael Raetz said the story of Tower Hill and the Belfast Coast could be as important as the Coorong in South Australia. 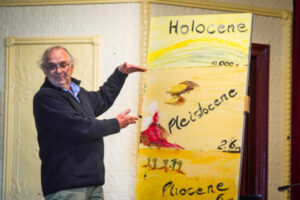 “It is the story of the land between two rivers, the Merri and the Moyne,” Mr Raetz said. “In between is an almost continuous wetland connection, until it was drained for farmland, and in the middle sits the biggest maar volcano in the southern hemisphere.”

The maar lake at Tower Hill was created when rising magma super-heated groundwater causing it to explode “in a massive 3000% expansion”, Mr Raetz said. The falling ash and fine matter created the distinctive bedding lines at Tower Hill, and extended east across the Merri River catchment.

“We know people were living here 37,000 years ago [when the volcano erupted] because some of the debris in the Merri River gorge buried a stone axe,” Mr Raetz said.

“There is a complex connection which talks about a sense of place, it is more than just landscape and pretty views, it is the culture embedded there.

“We need a full length documentary, we need to hear lots of voices, indigenous and professional voices, to tell this compelling story.

“Without the Community Foundation taking a chance on this sort of project, the story will never be told. So we are really grateful and looking forward to getting on with the filming.”

Port Fairy Tourist Association chair Ashley King said the documentary will educate, delight and highlight the cultural and geological heritage of the region for years to come.

“From a tourism perspective, it is a wonderful opportunity to have geo-tourism developed as a significant attraction in the region,” Mr King said.

“This will build on the progression of our cultural heritage by adding this geologically significant history of Tower Hill. It’s a great story to be told and a great opportunity to add another attraction in our region.”

Mr King said the documentary will extend the story started in a previous short film developed by filmmaker Martin Stringer, which was shown at the Port Fairy Adventure Film Festival (a previous recipient of a SWCF grant).

“The short was funded by the Community Bank Port Fairy and the Fletcher Jones Foundation, this has been a stepping stone to developing this longer program. We want to ensure this story is told, and what develops as a tourism aspect from this will be a great opportunity for the wider community.”

SWCF Board Chair David McIntyre said it was great to see so many passionate people coming together to support the Tower Hill documentary.

“This project will help promote the south west Victorian volcanic tourist trail, and help link Tower Hill and the Belfast coast to Budj Bim. The film will benefit all sectors of the community and help promote the unique landscape of our region.”